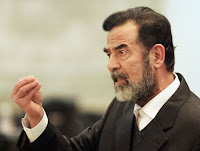 "WASHINGTON - Saddam Hussein feared Iran's arsenal more than a U.S. attack, and even considered asking ex-President George W. Bush "to protect" Iraq from its neighbor, once secret FBI files show.
The FBI interrogations of the toppled tyrant - codename "Desert Spider" - were declassified after a Freedom of Information Act request. The records show Saddam happily boasted of duping the world about stockpiling weapons of mass destruction. And he consistently denied cooperating with Osama Bin Laden's Al Qaeda.
Of all his enemies, Iraq's ex-president - who insisted he still held office during captivity - hated Iran most.
Asked how he would have faced "fanatic" Iranian ayatollahs if Iraq had been proven toothless by UN weapons inspectors in 2003, Saddam said he would have cut a deal with Bush.
"Hussein replied Iraq would have been extremely vulnerable to attack from Iran and would have sought a security agreement with the U.S. to protect it from threats in the region," according to a 2004 FBI report among the declassified files........"
Posted by Tony at 9:30 AM