Welcome to Lebanon: Graveyard of the Arrogant 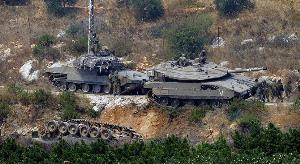 "......Just how and why Israel and most of the rest of the world so grossly underestimated the ability of the Lebanese to defend themselves is the main theme of David Hirst’s elegantly written and highly informed history Beware of Small States: Lebanon, Battleground of the Middle East (Nation Books.) ......

The explanation for Israel’s failure in Lebanon, not just in 2006 but over the previous three decades, is important because American interventions in Iraq, Afghanistan and Somalia have followed a similar trajectory....

Lebanon may be the ‘battleground of the Middle East’, as Hirst’s subtitle suggests, but this does not explain how it has become such a lethal trap for its tormentors over the last thirty years....

One explanation for Israeli and American lack of military success stems from the outcome of the Iranian revolution in 1979. This was the same year that the Israeli-Egyptian peace treaty changed the balance of power in the Middle East by removing Israel’s most powerful Arab opponent from its list of active enemies. It opened the door to Israel’s armed intervention in Lebanon. But the revolution in Iran ushered in a more important change in the type of resistance that Israel faced. The Arab nationalism originally inspired by Gamal Abdel Nasser dissipated after humiliating defeat by Israel in 1967 and the failure of corrupt and incompetent military rulers across the Arab world to confront Israel successfully.....

Everything in the Middle East has turned out the opposite of what Israeli foreign policy planners expected half a century ago. Then the Israeli priority was to weaken the mainstream Sunni Arab powers and build up an ‘alliance of the periphery’ through which non-Arab states such as Iran and Turkey would be cultivated as Israel’s friends. Part of this policy worked: Arab powers like Egypt were marginalized by military defeat and became politically moribund. Secular Arab nationalism, of which the PLO was the symbol and proponent, has been discredited by its weaknesses and failures......

One of the many fascinating aspects of Israel’s involvement in Lebanon is not that it got sucked into the Lebanese political morass but the way in which it kept on repeating earlier mistakes. Over thirty years there was continual underestimation of the other side, starting with the siege of Beirut in 1982......

Super patriotism and jingoism at times of war or threat of war are not an exclusively an Israeli trait but in Israel the propaganda is more intense and all pervasive. It distorts Israelis’ sense of reality. By any standards the assault by Israeli commandos on the May 2010 Gaza aid flotilla was a disaster, focusing international attention on the blockade and infuriating Turkey, once a strong Israeli ally. But by justifying this fiasco as a perfectly reasonable policing action in which the Turkish peace activists were at fault, the Israelis open the door for their own leaders to do exactly the same thing in future. And the very same leaders are likely to be in charge, because the refusal to admit that mistakes were made makes it impossible to fire those responsible for previous idiocies. Disaster-prone politicians like Benjamin Netanyahu and the Defense Minister Ehud Barack blunder on regardless of their long history of failing to balance high risks of failure against limited benefits from success. This is despite the fact that Israel’s wars against Lebanon in 2006, Gaza in 2008 and the Turkish aid flotilla in 2010 all left Israel weaker and its enemies stronger. At a time when Israel is threatening an air attack on Iran, its leaders are frighteningly incapable of calculating their own best interests."
Posted by Tony at 9:14 AM