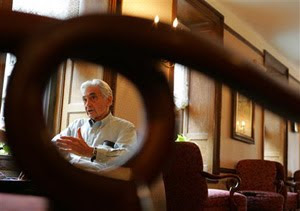 "Today I will teach my final American history class of the semester to prison inmates. We have spent five weeks reading Howard Zinn’s “A People’s History of the United States.” The class is taught in a small room in the basement of the prison. I pass through a metal detector, am patted down by a guard and walk through three pairs of iron gates to get to my students. We have covered Spain’s genocide of the native inhabitants in the Caribbean and the Americas, the war for independence in the United States and the disgraceful slaughter of Native Americans. We have examined slavery, the Mexican-American War, the Civil War, the occupations of Cuba and the Philippines, the New Deal, two world wars and the legacy of racism, capitalist exploitation and imperialism that continue to infect American society.

We have looked at these issues, as Zinn did, through the eyes of Native Americans, immigrants, slaves, women, union leaders, persecuted socialists, anarchists and communists, abolitionists, anti-war activists, civil rights leaders and the poor. As I was reading out loud a passage by Sojourner Truth, Chief Joseph, Henry David Thoreau, Frederick Douglass, W.E.B Du Bois, Randolph Bourne, Malcolm X or Martin Luther King, I have heard students mutter “Damn” or “We been lied to.”

The power of Zinn’s scholarship—which I have watched over the past few weeks open the eyes of young, mostly African-Americans to their own history and the structures that perpetuate misery for the poor and gluttony and privilege for the elite—explains why the FBI, which released its 423-page file on Zinn on July 30, saw him as a threat....."
Posted by Tony at 4:42 AM