Why Lebanese Palestinians insist on the right to bear arms 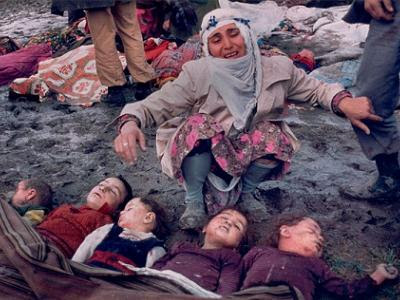 "This month, Palestinians in Lebanon commemorated the 28th anniversary of a crime whose perpetrators remain unpunished and whose victims still wait for justice. In September 1982, the Israeli army surrounded the Palestinian refugee camps of Sabra and Shatila in Beirut. For nearly three days, Israeli forces allowed their allies in the rightwing Lebanese Christian Phalange militia to enter the camps and massacre more than 1,000 Palestinian refugees and Lebanese citizens. All of the victims – men, women and children – were unarmed civilians.....
After speaking with dozens of individuals in the camp, all of whom refused to give up their right to bear arms, I asked a friend to take me to someone in the camp who he thought would disagree. He brought me to his 66-year-old grandmother, Miyasar, a refugee who has been forced to flee her home at least five times since 1948. She now lives in Shatila, where we sat overlooking a newly constructed multimillion dollar water well that has yet to be used.
Before I could even finish asking her the first questions about trading rights for arms, Miyasar closed her eyes, shook her head and said: "The Lebanese cannot give us rights, they can't even give themselves rights. Each group is by itself with its own weapons – Hezbollah has guns, Amal has guns, Future [Movement] has guns, The Lebanese are the ones who need help, not the Palestinians.
"When the Israelis came they said give up our guns, and we did and look what happened! Even a donkey that falls in one spot learns not to fall in that same spot again. We have no faith in Lebanese to give us rights. We will keep our weapons until we go back to Palestine.""
Posted by Tony at 4:02 AM