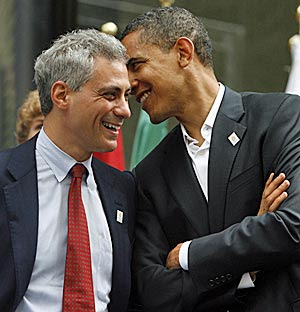 "Obama is losing his strong right arm. Dark days lie ahead, in which the president will lose traction with Congress, needlessly offend key constituencies, lose control of his legislative agenda. Why? His chief of staff, Rahm Emanuel, is quitting the White House, prelude to a bid to become mayor of Chicago.

But wait! Aren’t those dark days already here? Isn’t the president’s approval rating sinking steadily? Doesn’t he face the possible loss of both houses of Congress to the Republicans? Aren’t Democrats facing uphill fights in the midterm elections begging him to stay away and not doom them with his shadow?

All these things are true.....

By the time Obama hired him, Emanuel already had a proven record of toadyism to corporate America and the neocon lobby, Emanuel was a relict of all that was sleazy in the Clinton White House....

As Andrew Cockburn and later John Walsh described on this site at that time, Emanuel did his best to recruit candidates, preferably rich ones, guaranteed to eschew vocal opposition to the Iraq war, which Emanuel, a veteran of the Israeli army strongly favored.

After the midterm election John Walsh totted up the scorecard achieved by the man hailed as the Democrats’ can-do guy, as efficiently ruthless as the Great Satan himself, Karl Rove.
Emanuel had chosen chose 22 key races, open or Republican seats, where Democrats might win. “By any reasonable criteria,” Walsh wrote, “ all the candidates chosen by Emanuel, save perhaps for one, were pro-war as Emanuel himself......

Emanuel’s political profile was scarcely a secret , and so the fact that Obama picked him as his chief of staff was a painful kick in the stomach for all those foolish souls who thought Obama’s victory presaged exciting changes in America’s course...... 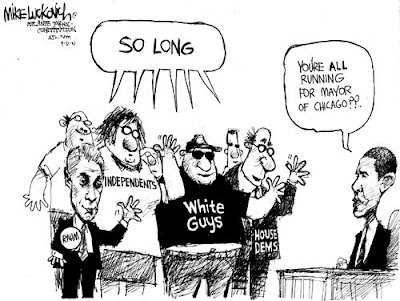 Obama had Emanuel guiding him into one disaster after another.....Obama can see that his presidency is in a fix beyond rescue by the elevated streams of verbiage that won him the White House back in 2008. Emanuel blames his boss, and his boss blames the progressives for letting him down! I blame the progressives for pumping Obama up in the first place. Realism is the first, best tool in politics......"
Posted by Tony at 5:20 AM