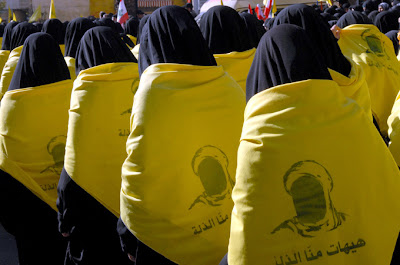 The movement has made it clear that to cooperate with the Special Tribunal is to collaborate with its enemies.

The reaction to the incident has underscored the depth of Lebanon's internal divisions. For some the STL is a symbol for "a quest for justice" for others a symbol "of flagrant Western intervention".....

But the reconciliation with Syria was short lived and ties between al-Hariri and Damascus deteriorated as his coalition stepped up the rhetoric against Hezbollah. For as well as delegitimising the movement, an indictment would serve to undermine Syrian and Iranian influence in the country and could ultimately be used to tie Syria or Iran to the murder if the US considered it politically useful to do so.....

Aware of the efforts to corner it, Hezbollah has vowed to stay put - bringing to mind the events of May 2008, when its armed men took to the streets of Beirut in a bid to force the government to revoke its decision to take over the party's communications network.

Hezbollah had made a commitment to the Saudi king and Syrian president not to resort to violence to solve internal problems but feeling the weight of the increasing pressure upon the group, Nasrallah appears to be keeping all his options open.

The battle over the STL in Lebanon has come to embody all of the internal and external conflicts that could rip the tiny country apart. It has also become the most valuable tool for the March 14 coalition, which is already using it to cut down Hezbollah - a group which has disrupted the Lebanese elite's sectarian power-sharing formula since it gained legitimacy as a resistance movement.

But Hezbollah has demonstrated that it is not easily intimidated and will fight back."
Posted by Tony at 3:23 AM