Libya's Next Fight: The West 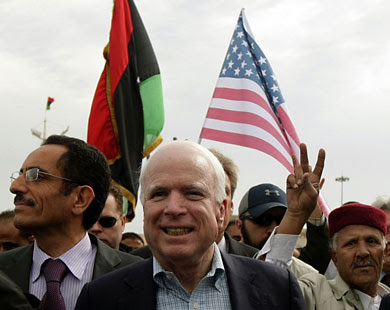 "....Listening to upbeat statements by rebel military commanders, and optimistic assessments of NTC members, one gets the impression that the future of Libya is being entirely formulated by the new Libyan leadership. Arab media, lead by Al Jazeera, seemed at times to entirely neglect that there was a third and most powerful party involved in the battle between freedom-seeking Libyans and the obstinate dictator. It is the North Atlantic Treaty Organization, whose decisive and financially costly military intervention was not charitable, nor was it a moral act. It was a politically and strategically calculated endeavor, with multifaceted objectives that simply cannot be scrutinized in one article.

However, one needs to follow the intense discussion under way in Western media to realize the nature of NATO's true intentions, their expectations and the bleak possibilities awaiting Libya if the new leadership doesn't quickly remove itself from this dangerous NATO alliance.

While Libyans fought against brutality, guided by a once distant hope of freedom, democracy and liberation from the grip of a clownish and delusional dictator, NATO calculations had nothing but a self-serving agenda in mind.....

Tuning back to Arabic media however, one is confronted with almost an entirely different discourse, one that refers to NATO as "friends," to whom the Libyan people are "grateful" and "indebted." Some pan-Arab TV channels have been more instrumental than others in introducing that faulty line of logic, which could ultimately bode terrible consequences for Syria, and eventually turn the Arab Spring into an infinite winter.

The Libya that inspired the world is capable of overcoming NATO's stratagems, if it becomes aware of NATO's true intentions in Libya and the desperate attempt to thwart or hijack Arab revolts."