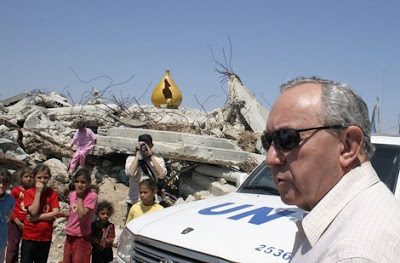 "The Israeli military has closed its file on the killing of 21 members of a Palestinian family during the Gaza war in 2009, saying there were no grounds for criminal or disciplinary action against those responsible for the shelling of the house in which civilians were sheltering.

"None of the persons involved … acted negligently in a manner giving rise to criminal responsibility," concluded the military advocate general following an internal investigation. The decisions of the brigade commander "did not deviate from the boundaries of discretion that a 'reasonable military commander' operating in similar circumstances possesses".....

A report by South African judge Richard Goldstone on behalf of the United Nations examined in detail the Samouni family incident. It concluded the deaths were the result of "Israeli fire intentionally directed at them" in breach of the Geneva conventions.

About 1,400 Palestinians and 13 Israelis were killed in the three-week conflict."
Posted by Tony at 7:00 AM