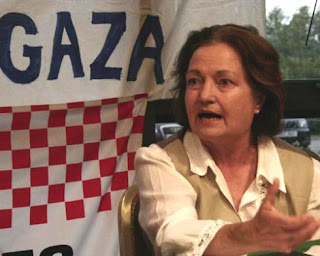 [Editors' Note: This piece by Nobel Peace prize winner Mairead Maguire was submitted to the New York Times. They declined to publish it.]

"In 2009 Israel’s foreign minister Avigdor Liebermann ordered all foreign missions to distribute a 1941 photograph of the then Palestinian leader in exile, Haj Amin Al Husseini meeting Hitler. The motivation behind Liebermann’s order lay in international criticism of Israel’s decision to further expand its illegal settlements in occupied East Jerusalem; the not too subtle subtext being that as Palestinians are Nazis any policy implemented against them is justified.

This week the David Horowitz’s Freedom Center perpetrated the same historical distortion in its advertisement comparing college professors who advocate Boycott, Divestment and Sanctions (BDS) against the state of Israel to the Nazi government’s persecution of Jews. Ignoring the political and human rights context in which the call for BDS has been made, and its ultimate aim of securing compliance with international human rights standards, its proponents are instead vilified as Jew haters and their opposition to illegal Israeli policies presented as hatred of ‘the Jewish state.’ Through a series of outrageous assertions their support for Palestinian human rights is linked to the Nazis, calls for genocide and the Toulouse murders.

The truth however is that the call for BDS lies neither anti-Semitic in intent or effect, but reflects the recognition that after 20 years of failed negotiations and almost 44 years of military occupation and illegal colonization, there is no means by which Palestinians can achieve their basic human rights and freedoms except through the activism of international civil society......."
Posted by Tony at 9:15 AM

Hi there! Quick question that's totally off topic. Do you know how to make your site mobile friendly? My weblog looks weird when browsing from my iphone. I'm trying
to find a template or plugin that might be able to fix this issue.

If you have any suggestions, please share. Thank you!


Look at my web-site - what is a phlebotomist technician

Hello to all, how is everything, I think every one is getting more from this website, and your
views are pleasant in support of new people.

Have a look at my blog - phlebotomy classes in indiana

I am regular visitor, how are you everybody?

This piece of writing posted at this website is actually nice.