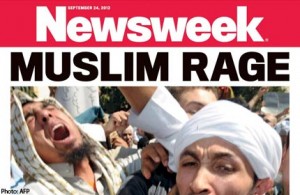 "CAIRO: Think about this for a second. Rush Limbaugh writing the cover story for TIME Magazine on the issue of gay rights in the United States. Think that he is being promoted as being a knowledgeable authority on the topic. Sounds ridiculous? Well it is. But when Newsweek used Ayaan Hirsi Ali as the writer for their cover story in this week’s “Muslim Rage” issue, they might as well have asked Rush Limbaugh to do the same. Both are virulent anti-Islamic critics. The only caveat for Hirsi Ali is that she is Somali and had been Muslim.

Hirsi Ali is no better a commentator on Islam than Nakoula Besseley Nakoula, the reported producer of the anti-Islam film that insulted Prophet Mohamed and sparked protests across the Islamic world. Her anti-Islam stance is well-known and itself has created anger among the Muslim community in Europe.

While she is a well-known Somali-born activist and former Dutch lawmaker whose criticism of Islam has earned her death threats, she fails to detail why Muslims hate her......


Instead of looking closely at the root causes of anger in the Islamic world, of which Hirsi Ali has been a leading cause of in recent years, the magazine chose instead to inflame and insult once more a faith that has been demonized across the Western media for years.

There is no mention of the radical and extremist Christian elements that sparked the furor among the Muslims. The issue appears to deliver an accusation against Muslims that their anger and frustration over their faith’s representation in the west is their own doing and that they are to blame for all that has happened.
Newsweek should know better. They should be more equipped to make decisions based on reality and facts rather than their obvious attempt to sell magazines by attacking what is a more convoluted reality facing Islam and the protests of the past week."