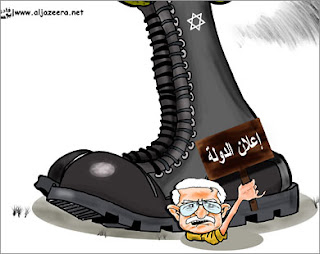 
Comment: The latest uprising of Palestinian teenagers believes that Israel is no longer the only target of resistance, writes Said Arikat.
Israeli Prime Minister Binyamin Netanyahu said last week that, although he did not want a binational state, "at this time we need to control all of the territory for the foreseeable future" - finally ending the two-state illusion and closing the curtain on the so-called peace process.

There is nothing new in Netanyahu's latest assertion; he has made it in different forms many times before. In fact, last March he ran for reelection on the promise that no Palestinian state would ever emerge under his watch.

Netanyahu, who has been happily fabricating his own version of reality and rewriting history to demonise the Palestinians - and literally blame the victim - said last week that Hitler was convinced to exterminate the Jews by Haj Amin al-Husseini, a Palestinian religious leader.

Netanyahu also recently referred to the anniversary of Yitzhak Rabin's assassination, telling the Knesset Foreign Affairs and Defense Committee: "These days, there is talk about what would happen if this or that person would have remained. It's irrelevant; there are movements here of religion and Islam that have nothing to do with us."

Barak Ravid of Haaretz reported: "Netanyahu then turned to opposition MKs and said: You think there is a magic wand here, but I disagree. I'm asked if we will forever live by the sword - yes."

Enough said; Israel has every intention to control all of the territory from the Jordan River to the Mediterranean Sea - even with the acknowledgement that this means it will "forever live by the sword" - meaning endless war on the Palestinian people.

The intensity of Israel's violence against the Palestinians since the outbreak of the current uprising, especially in East Jerusalem, should also bring into focus the horrendously painful journey the Palestinian people under occupation have been thrust into by a shortsighted and visionless leadership that precipitously signed onto the Oslo Accords a little more than 22 years ago.

Now this very Palestinian Authority - that in many ways gave cover to the occupation by having lifted the international legal responsibilities that any military occupying power must hold under the Geneva Conventions - has found itself up against the stubborn Israeli intent to maintain both the West Bank and East Jerusalem under perpetual occupation.

Now this leadership has not only completely run out of options - as it continues to cling to its "status" as per the Oslo Accords - but also finds itself less and less relevant, with events spiraling out of control, even in Ramallah.

So as we watch Palestinians under occupation, an endless siege punctuated only by Israeli bombardment, we are haunted by the stark images of this latest wave of confrontation between occupier and occupied.

Palestinian teenagers have gotten to a point where the hopelessness imposed by the savagery of the criminal occupation has pushed them over the edge to take on the mighty Israeli military with the crudest of means available: the stone or the blade of a kitchen knife - ushering in yet another era of this generational Palestinian struggle against the occupation.

Almost everyone has realised that the pace of illegal settlement construction in East Jerusalem and the rest of the West Bank, combined with the brutality of the occupying Israeli military, has rendered all the considered variations on the theme of a two-state solution impossible.

Long before this latest excursion into the region to "urge restoring calm among the parties" in the uprising - 16 months ago - US Secretary of State John Kerry tried to push Netanyahu to show some flexibility, as he squeezed the Palestinian Authority for more concessions, but "failed" because Israel prefers colonisation to peace.

So now what? On the one hand you have an Israeli government that has become virtually inseparable from the settler movement; the expansionist vision of right-wing settlers has become official state policy in Tel Aviv.

On the other, the Palestinian Authority seems to sing the same tune, although grudgingly knowing that in recent years it has lost even the ability to say "no", despite having nothing to gain by its acquiescence, and much to lose.

With the end of the "peace process", and the international community's silence about how the conflict might end -which has replaced earlier false hopes invested in diplomatic negotiations - as well as the Arab world's preoccupation with other regional conflicts, Israel has been left unaccountable, completely invulnerable and protected by the US.

The Palestinians, meanwhile, especially those in East Jerusalem, are totally left to the mercy of their tormentors and violence at the hands of the occupying authorities.

It is obvious that the disappointment with the dysfunction of the PA, in general, and with Fatah, in particular, is deep-seated.

This is a generation that is unfamiliar with the legacy of PLO leader Yasser Arafat and does not follow his ideas or beliefs. Neither does this young generation spare its criticism of Hamas and its members, whose prestige has also considerably declined.

It seems that young Palestinians have come to consider the PA an idler, a servant of the occupation, even a collaborator with it.

Once revered and respected, Fatah members are described as cowards and corrupt, who have long relinquished the struggle against Israel to enjoy benefits and perks. For those young people, especially those who were born into the second intifada, none of these organisations - Fatah, Hamas or Islamic Jihad - is worthy of joining.

This generation of young people is defying the old guard that promised statehood but failed to deliver. This young generation sees the previous one - even their own parents who caved in under the plight - as the one that did not have the courage to take destiny into its own hands and work for the future.

From Israel's point of view, the main question is whether "this latest wave of Palestinian terror" can be stopped, and how. But all the methods Israel employed during the second intifada, including targeted killings of militants and leaders, are presently ineffective.

More than likely, the current spell of Palestinian defiance against the Israeli occupation and the PA itself will only grow and will destabilise Israel and undermine Mahmoud Abbas' PA.
Said Arikat is the Washington bureau chief of the Jerusalem-based al-Quds newspaper. Follow him on Twitter: @SMArikat