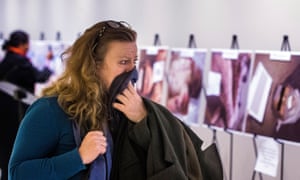 A woman reacts as he looks at a gruesome collection of images taken by a Syrian military photographer identified as ‘Caesar’, at the UN headquarters in New York. Photograph: Lucas Jackson/Reuters
Link


A leading rights group has released new evidence that up to 7,000 Syrians who died in state detention centres were tortured, mistreated, or executed and insisted that holding officials to account should be central to peace efforts.
Human Rights Watch has identified 19 victims from a mass collection of photographs known as the Caesar files, which were released by a military defector who chronicled deaths in Syrian regime custody for more than two years.
Details of the deaths shed new light on the conditions endured by detainees in at least five government-run detention centres, which are thought to have held at least 117,000 people since anti-regime protests broke out in March 2011. 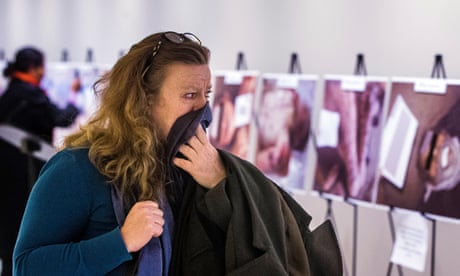 ‘They were torturing to kill’: inside Syria’s death machine

Read more
The new details were released on Wednesday morning in Moscow, two days before a 17-nation meeting of the International Support Group onSyria is due to reconvene in New York to try to map a way out of the nearly five-year war that continues to ravage the region and reverberate throughout Europe.
Russia and the US have been increasingly vocal in efforts to end the crisis. However, both sides remain poles apart over what steps needed to be taken. Moscow has consistently opposed allowing regime officials to be held to account through international justice. The US, meanwhile, has sent mixed signals on a political transition away from the Syrian leader, Bashar al-Assad, a key demand of opposition groups fighting to oust him.
Human Rights Watch said some of the deaths have unambiguously been traced to five detention centres and two state hospitals around Damascus, which have been the focus of widespread claims of abuse and killing.
They include sites that have been infamous throughout the war and during several decades of ruthless state control. One feared site, the 601 military hospital in the Damascus suburb of Mezze is where many of the bodies were taken, witnesses said.
The existence of such locations has been seen by opposition communities as a key driver of the revolt against Assad. None of the 19 bodies identified by Human Rights Watch have been recovered and families have received death certificates in only two cases – both of which said the victim had died from heart or respiratory failure.
Each case was studied by a forensic pathologist who examined multiple photographs of the victims. Evidence was found of starvation, blunt force trauma, wound infection, and in one case a gunshot wound to the head.
“We have no doubt that the people shown in the Caesar photographs were starved, beaten, and tortured in a systematic way, and on a massive scale,” said Human Rights Watch’s deputy Middle East director Nadim Houry.
“These photographs represent just a fraction of people who have died while in Syrian government custody – thousands more are suffering the same fate.” 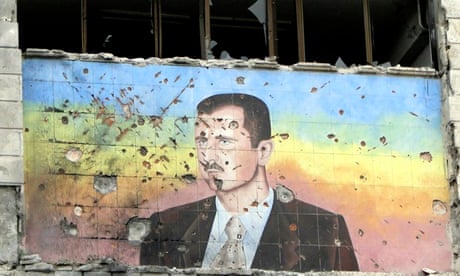 Read more
The only woman in the files has been identified as Rehab al-Allawi, 25, an engineering student at Damascus University, who disappeared in January 2013, while working with an activist group.
Her family said they paid $18,000 (£12,000) to Syrian officials for information about her, but received nothing. She was eventually recognised from the Caesar files and her death was confirmed by pathologists who examined photographs of her body.
Ahmad al-Musalmani, 14, is believed to be the youngest victim in the Caesar files. His family learned that he had been detained at a regime checkpoint near Daraa in southern Syria after an anti-Assad song had been found on his phone.
When the Caesar photographs were released, his uncle Dahi al-Musalmani searched through them and found Ahmed.
“I went directly to the folder of the Air Force Intelligence,” he told the report’s authors. It was a shock. Oh, it was the shock of my life to see him here. I looked for him, 950 days I looked for him. I counted each day. When his mother was dying, she told me: ‘I leave him under your protection.’ What protection could I give?”
Caesar, whose identity remains protected, has briefed US legislators on the scale of the death and suffering he was forced to chronicle. He remains in hiding. The photos have been showcased around the world as evidence of a systematic detention policy run by Syrian officials. Assad has denied that mass detention or abuses have taken place.
Caesar’s claims were first published by the Guardian and CNN in February 2014.
Posted by Tony at 7:33 AM