175
Save for later
At least 45 civilians have been killed during heavy bombardment of a besieged Syrian rebel stronghold east of Damascus that also struck a school.
The Syrian Observatory for Human Rights monitoring group said rockets fired by regime forces landed on the towns of Douma, Harasta, Saqba and Arbin in the opposition-held Eastern Ghouta region. 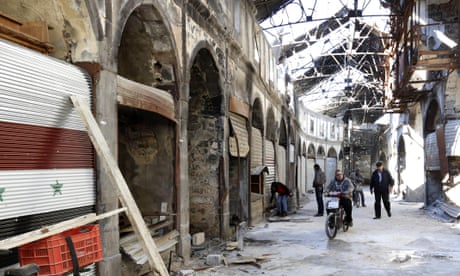 Life stirs in Homs as Syrian rebels withdraw: ‘In our minds we knew we would return’

Read more
Observatory head Rami Abdel Rahman said airstrikes also hit the towns, but it was unclear whether they were carried out by Syrian orRussian warplanes.
At least 10 children and four women were among the dead and dozens of people were wounded, he said.
“One of the airstrikes on Douma hit near a school, killing the school’s principal,” Abdel Rahman said.
Men carried children across the dust-covered rubble of destroyed buildings in Douma, whose streets were littered with debris and shards of glass, according to a photographer on the scene.
A small girl’s body lay on an operating table in a field hospital, as doctors prepared to operate on her badly-wounded leg.
An activist group in Douma shared photographs on Facebook of crumbling buildings and bloodied children lying in a makeshift clinic.
In one jarring photo, children’s shoes, notebooks, and bags are strewn across the blood-stained floor of what the group said was a schoolyard in Douma.
Abdel Rahman said one rebel fighter was also killed in the bombardment on Sunday.
Government forces regularly bombard Eastern Ghouta, and rebels there fire rockets and mortar shells into the capital.
On Sunday, three people, including two children, were killed in rebel mortar fire on Damascus, according to the state news agency Sana.
Three more people were killed and dozens wounded in mortar fire on a Damascus suburb controlled by government forces, Sana reported.
Last month, regime forces and rebel groups tried to agree on a 15-day ceasefire in Eastern Ghouta.
Airstrikes in the area are at times conducted by Russian warplanes, which began carrying out an air war in Syria in September.
Suspected Russian strikes on Douma in November killed 23 Syrian civilians.
Posted by Tony at 7:46 AM