Bolivians back Morales in vote triumph 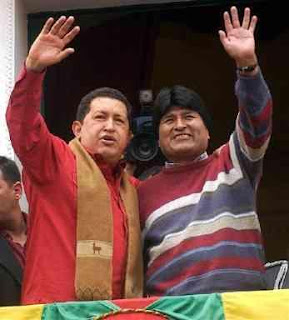 "Partial results give Bolivian President Evo Morales a clear victory in a referendum designed as a litmus test for his socialist reforms.

Partial results from nearly half of country's polling stations show that nearly 64 percent of Bolivians voted in support of the mandate of Morales and his Vice-President Alvaro Garcia.

The majority is 10 percent more than the majority which won Morales the presidency in 2006.

Addressing a happy crowd from the balcony of the government palace in La Paz, Morales called on Bolivians to continue on the path towards social reform in Latin America's poorest country.

"We are here to continue recovering natural resources and the consolidation of nationalization," he said.

Sunday's recall vote was proposed to confirm support for reforms designed to give Bolivia's poor indigenous population a greater share of national wealth and political power amid opposition from the country's richer states.......

The vote will be seen as a further swing to the left among Latin American leaders such as Hugo Chavez of Venezuela and Luis Inacio “Lula” da Silva in Brazil. "
Posted by Tony at 3:03 AM