Challenging the siege from Rafah to Cyprus 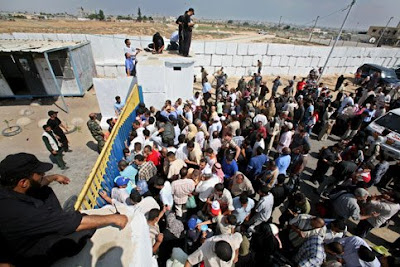 Palestinians wait to cross into Egypt at the Rafah border crossing in the southern Gaza Strip, July 2008.

"On Sunday, hundreds of Hamas supporters, many stranded Gaza patients, students and travelers, took part in a rally at the Palestinian side of the Rafah crossing terminal in southern Gaza, against the continued closure of the terminal for the past 14 months and calling on Egypt to reopen it. Organized by the ruling Hamas party, the attendees blamed the Egyptian leadership for the terminal closure, saying that this crossing, Gaza's sole outlet to the outside world, should be opened under joint Palestinian-Egyptian control.....

Meanwhile, across the Mediterranean Sea forty international aid workers, human rights activists, intellectuals and journalists are attempting to sail from Cyprus to Gaza, in solidarity with the 1.5 million residents of the besieged coastal enclave. Called the Free Gaza Movement, the organizers are determined to break the siege of Gaza despite the Israeli warning to prevent their entry and it is expected to arrive in the next two days......."
Posted by Tony at 6:11 AM