Jewish Georgian official: Our army has IDF training to thank 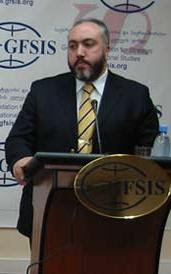 "Jewish Georgian Minister Temur Yakobshvili on Sunday praised the Israel Defense Forces for its role in training Georgian troops and said Israel should be proud of its military might, in an interview with Army Radio.

"Israel should be proud of its military which trained Georgian soldiers," Yakobashvili told Army Radio in Hebrew, referring to a private Israeli group Georgia had hired.

Yakobashvili, Georgia's minister of reintegration, added that this training provided Georgia with the know-how needed to defend itself against Russian forces in the clashes which erupted last last week in the separatist region of South Ossetia. Yakobashvili said that a small group of Georgian soldiers had able to wipe out an entire Russian military division due to this training.

"We killed 60 Russian soldiers just yesterday," said Yakobashvili. "The Russians have lost more than 50 tanks, and we have shot down 11 of their planes. They have enormous damage in terms of manpower,"

Yakobashvili warned that the Russians would try and open another battlefront in Abkhazia and he denied reports that the Georgian army was retreating. "The Georgian forces are not retreating. We move our military according to security needs."

"There was no attack on the airport in Tbilisi. It was a factory that produces combat airplanes," said Yakobashvili referring to the attacks in the country's capital.

According to him, "every bomb that falls over our heads is an attack on democracy, on the European Union and on America." "
Posted by Tony at 11:21 AM