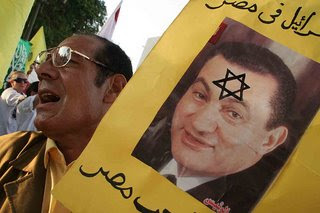 "Doublespeak absurdity is plentiful at the moment; I thought I'd had more than my fair share of it in the West Bank this week, watching Israel's brazen PR zealots deliver soundbite after soundbite into television cameras, each of them notable only for their heart-stopping audacity. But that was before I returned to Cairo to hear the Mubarak government's breathtaking contortions as it tried to justify its complicity in Israel's Gazan bloodbath.

The pages of Egypt's state-owned newspapers are an inky testament to George Orwell's claim that "Political language ... is designed to make lies sound truthful and murder respectable, and to give an appearance of solidity to pure wind." A few brief examples......
As ever, developments across the border help to give fresh impetus to these anti-regime struggles and provide a wide range of opposition political interests – from socialists to liberals, secularists to Islamists – with an opportunity to unite around a potent and effective political symbol which advances their cause. And as ever, the regime reacts brutally, putting Cairo University under siege even as its figurehead publicly bemoans the fate of the besieged Palestinians of Gaza. The students struggling to make themselves heard on campus behind the batons and riot shields of Mubarak's law enforcers are not pawns in the geopolitical fissures that the media obsess over, nor are they blind footsoldiers of Hamas and the Muslim Brotherhood.
They are, for the most part, simply fired by the Gazan catastrophe into giving voice to the simmering anger felt by much of the population at the twisted and tragic policies of an Egyptian government which, as the author Alaa al-Aswani recently wrote, has created its own generation of martyrs killed by "corruption and abuse of power" – through accidents and negligence and the poisonous grip of poverty – a government also colluding in the subjugation and destruction of Palestinians on Egypt's border. Unable and unwilling to break free of its well-worn preconceptions, most of the media prefers to ignore this crucial fault-line in the Arab world's largest state when "explaining" the Gazan assault. By throwing attention elsewhere instead, they are carrying out a dangerous conjuring trick which insults and undermines Egyptians and Palestinians alike."
Posted by Tony at 8:20 AM