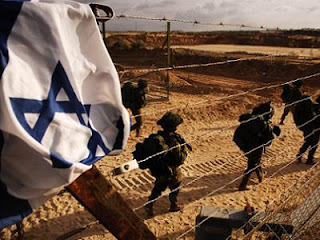 "........Israeli official policy – military or otherwise - is governed by the same Zionist diktats that long preceded the establishment of the state of Israel. If anything has changed since early Zionists outlined their vision, it was the interpretation of those directives. The substance has remained intact.

For example, Zionist visionary, Vladimir Jabotinsky stated in 1923 that Zionist “colonization can…continue and develop only under the protection of a force independent of the local population – an iron wall which the native population cannot break through.” He was not then referring to an actual wall. While his vision took on various manifestations throughout the years, in 2002 it was translated into a real wall aimed at prejudicing any just solution with the Palestinians. Now, most unfortunately, Egypt has also started building its own steel wall along its border with the war-devastated and impoverished Gaza Strip......

Peled is of course right. There will be a new confrontation. New strategies will be employed. Israel will raise the stakes, and will try to draw Syria in, and push for a regional war. A Lebanon that defines itself based on the terms of resistance – following the failure to politically co-opt Hizbullah – is utterly unacceptable from the Israeli viewpoint. That said, Peled might be creating a measured distraction from efforts aimed at igniting yet another war - against the besieged resistance in Gaza, or something entirely different. (Hamas’ recent announcement that its senior military leader Mahmoud al- Mabhouh was killed late January in Dubai at the hands of Israeli intelligence is also an indication of the involved efforts of Israel that goes much further than specific boundaries.)

Will it be Gaza or Lebanon first? Israel is sending mixed messages, and deliberately so. Hamas, Hizbullah and their supporters understand well the Israeli tactic and must be preparing for the various possibilities. They know Israel cannot live without its iron walls, and are determined to prevent any more from being built at their expense."
Posted by Tony at 7:48 AM