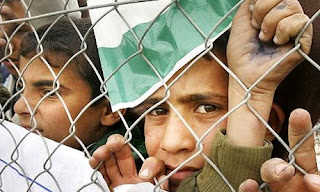 "....This “adjustment”, as the Israeli prime minister Benjamin Netanyahu termed it, is aimed solely at damage limitation. With Israel responsible for killing nine civilians aboard a Gaza-bound aid flotilla three weeks ago, the world has finally begun to wonder what purpose the siege serves. Did those nine really need to die to stop coriander, chocolate and children’s toys from reaching Gaza? And, as Israel awaits other flotillas, will more need to be executed to enforce the policy?....

Is Mr Weisglass a relic of the pre-Netanyahu era, his blockade-as-diet long ago superseded? Not a bit. Only last month, during a court case against the siege, Mr Netanyahu’s government justified the policy not as a security measure but as “economic warfare” against Gaza. One document even set out the minimum calories – or “red lines”, as they were also referred to – needed by Gazans according to their age and sex.

In truth, Israel’s “security” blockade is, in both its old and new incarnations, every bit a “civilian” blockade. It was designed and continues to be “collective punishment” of the people of Gaza for electing the wrong rulers. Helpfully, international law defines the status of Israel’s policy: it is a crime against humanity.

Easing the siege so that Gaza starves more slowly may be better than nothing. But breaking 1.5 million Palestinians out of the prison Israel has built for them is the real duty of the international community."
Posted by Tony at 6:26 AM