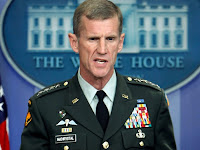 A prank – or a provocation?

".....As the nation teeters on the brink of economic disaster at home, as well as military disaster on the Afghan front, there are voices calling for a Leader – capitalize that, please. The military virtues are a shelter in a socio-economic storm, the causes of which are incomprehensible to the average American. The people are yearning for someone to tell them what to do, and when to do it, and what better leader-figure amid all this turmoil than a tough-talking no-nonsense roughneck, a brute for brutish times. Whether that figure is McChrystal, or someone else, isn’t really the point. What’s important is that his actions – and the President’s response – will set an important precedent.
In the age of empire, American military leaders – even the insubordinate kind – are inevitably becoming political figures. To anyone who understands the original intent of the Founders, and their mortal fear of a permanent military caste, this is a frightening development: indeed, it is a turning point, one that the history books of McChrystal’s imagination will note as the moment an American Caesar crossed the Rubicon – or not."
Posted by Tony at 4:45 AM