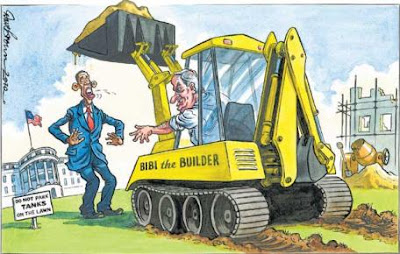 "It has been impossible to read the agenda for the Oval Office summit between Obama, Netanyahu and Abbas without laughing out loud at the absurdity of its pretensions. The American plan was that President Obama would inform Israeli PM Binyamin Netanyahu and Mahmoud Abbas, representing the Palestinian Authority, that this is make-or -break time for a peaceful settlement. The US wants an agreement within a year, with the stipulations in this agreement to be phased in over a decade.

At issue: the illegal Jewish settlements, the status of East Jerusalem, the treatment of Palestinian refugees and final borders between Israel and a Palestinian state.

The man greeting Netanyahu and Abbas was no longer the icon of change who aroused the world with his address to Muslims in Cairo and who tasked former US Senator George Mitchell with setting the stage for a just settlement of issues that have remained unsettled for more than half a century.

Gone was any notion of twisting Netanyahu’s arm, or trying to, as when the Administration criticized one illegal Jewish settlement four months ago and when vice president Biden relayed in Tel Aviv Gen. Petraeus’ concerns that Israel’s obduracy was imperiling US security interests in the region.

The lobby struck back, with political threats.....

And with the September summit Israeli delightedly pointed to Obama's withdrawal of a demand that Israel freeze Jewish colonies on Palestinian land. Instead he urged "restraint". "The prime minister is satisfied because his main position that negotiations should be without preconditions was accepted.....

For his part, Abbas is no longer president of the Palestinian Authority, which has no democratic mandate among the vast majority of Palestinians. They voted for Hamas and regard Abbas as a quisling, who exists solely by the favor of US money, Pentagon security advisors and Israeli support....."
Posted by Tony at 4:17 PM