IN THE MIDEAST, THE US IS A HELPLESS GIANT 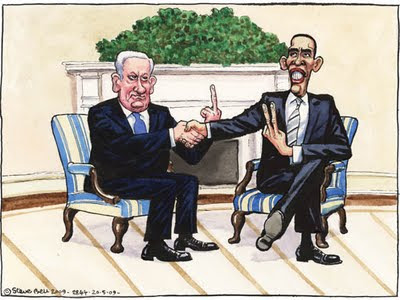 "......US President Dwight Eisenhower deemed the tripartite Suez aggression immoral and damaging to American interests in the Muslim world. “Ike” angrily ordered the British, French and Israelis to get out of Egypt at once – or else. They got out.

Fast forward to 2010. President Barack Obama has been demanding Israel stop building illegal Jewish settlements around Jerusalem and on the West Bank.

After the Suez invasion, Israel’s American partisans set about building an influence network that would ensure no American president could ever force Israel to do anything against its will. Over the next half century, the Israel lobby became the most powerful and feared lobby in America, dominating both the US Congress and media.

The lobby’s brilliant success was again confirmed last week as Benjamin Netanyahu, leader of Israel’s rightist coalition, literally spit in Obama’s face, sneeringly rejecting the president’s pleas to create a viable Palestinian state. Vice President Joseph Biden was earlier humiliated on a trip to Israel to plead with Israel to stop building Jewish settlements. The US Congress and rightwing media actually applauded the public humiliation of their president and vice president.

How the mighty have fallen. Obama has shown himself utterly without spine, and terrified of the Israel lobby at a time when his political fortunes are plummeting.....
By caving in to Israel’s hard right over the West Bank, Obama sends a message of profound weakness to the rest of the world. He is signaling that Israel, not the White House, really makes America’s Mideast policy......
The humiliated Palestinian Authority is shown as a helpless puppet of the Americans and Israelis, as rival Hamas has long charged. Its hapless leader, Mahmoud Abbas, should resign if he has a shred of pride left. The pliant Abbas was put into power by the US and Israel after PLO chief Yasser Arafat’s convenient death that many Palestinians suspect was caused by poison.

Obama’s shameful failure in the Mideast will haunt the world for decades. "
Posted by Tony at 4:54 AM