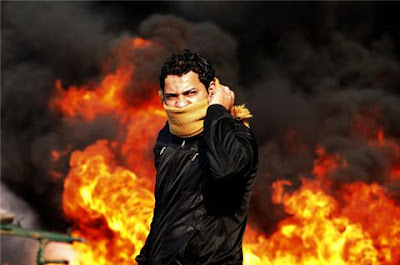 Our generation has finally rediscovered the lost revolutionary heritage of our forefathers – we must keep the dream alive
Abdel Razzaq Takriti
guardian.co.uk, Friday 18 February 2011

"......This Arab quest for freedom and liberation has always had powerful opponents; our dreams are their nightmares. They know as well as we do that the Egyptian revolution represents not just the overthrow of the ancien regime, but the decolonisation of the country. The first condition of true representative democracy is independence. But this is not something that the American, Israeli and other foreign governments wish for Egypt or any other Arab country, in spite of the attempts at presenting the Egyptian military establishment as a free-standing independent actor.

Yet, it may still be possible to realise our dream if we can keep close to popular consensus, which in Egypt's case has growing influence within the lower ranks of the army, who are overwhelmingly patriotic. The challenge for this generation of Arab youth is not to lose the momentum: our generation has finally rediscovered the lost revolutionary heritage of our parents and grandparents. Today, hundreds of thousands are struggling for their freedom in Bahrain, Libya, Yemen, Iraq and Palestine. If the Tunisian and Egyptian revolutions have taught us anything, it is that we organise without respite until the rest of the Arab world is also free: we carry the dream."
Posted by Tony at 6:31 AM