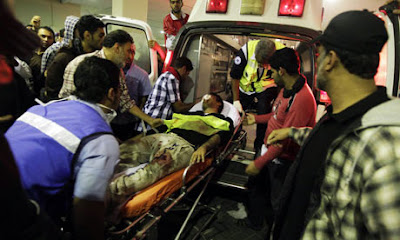 The strategy was to demonstrate peacefully, but attacking Bahraini activists has ruined hopes of a brokered deal

".....Even ambulance workers were attacked, and we hear that so far four people have died, including a medic, and hundreds have been injured. The army has been deployed all over Manama and a security operation has been launched to locate and arrest activists. These events mark a turning point. After what has now happened, it is difficult to imagine the possibility of negotiations. Pearl Square has been cleared, but the funerals of those who were murdered will be full of shocked citizens even more determined to confront the regime. The British foreign minister visited Bahrain last week and did not call openly for serious reforms. The UK has much influence in the country and a great deal of leverage over its rulers. It should use this opportunity and stand with the Bahraini people."
Posted by Tony at 4:47 AM