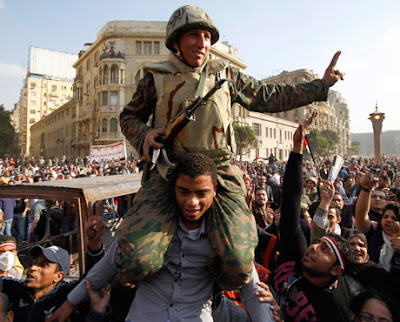 ".......The man who ruled for 30 years thought it would satisfy the protesters while still allowing him to go with dignity by keeping his title, if not his powers, for a few months more.

Mubarak's transfer of power to Suleiman – the former intelligence chief who played a leading role in suppressing political opposition and was America's point man in Egypt in the rendition and torture of alleged terrorists – was not an acceptable alternative.

To the protesters, Mubarak had merely rearranged the deckchairs. Far from being placated, many saw his speech as further evidence of the regime's vulnerability and their anger strengthened their determination to bring it down.....

Zayat said Mubarak's speech — and one that followed by Suleiman — "was formulated against the wishes of the armed forces, and away from their oversight" and amounted to an unprecedented breach between the president and the military. In short, the army that had kept Mubarak in power had lost confidence in him....

The military's supreme council concluded that the only way to deal with the crisis was for Mubarak to go and to be seen to be gone. He and his family were packed on a plane and dispatched to his palace in the Red Sea resort of Sharm el-Sheikh....."
Posted by Tony at 8:41 AM