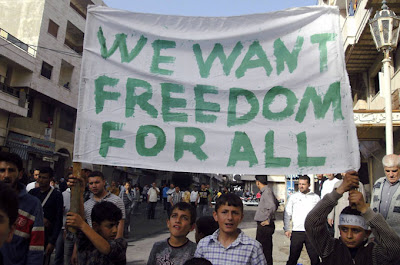 Deaths reported in Damascus, Idlib and other cities as massive demonstrations mark "Freedom for prisoners" day.

"As many as 14 protesters have been killed across Syria after security forces reportedly shot at protesters, hundreds of thousands of whom took to the streets in the biggest protests so far against Bashar al-Assad's rule.

Police fired live ammunition and teargas in the capital Damascus, killing five people, and in southern Syria near the Jordanian border, where four people were killed, the Reuters news agency said quoting witnessess and activists.

Three protesters were shot dead in the northern city of Idlib, they said.

"We are in Midan and they are firing teargas on us, people are chanting," a witness said by telephone from the centre of Damascus.

In the city of Hama, scene of a 1982 massacre by the military, live video footage by residents showed a huge crowd in the main Orontos Square shouting "the people want the overthrow of the regime".

At least 350,000 people demonstrated in the eastern province of Deir al-Zour, the Syrian Observatory for Human Rights (SOHR), an independent rights group based in London, said.

"These are the biggest demonstrations so far. It is a clear challenge to the authorities, especially when we see all these numbers coming out from Damascus for the first time," Rami Abdelrahman, head of the SOHR, said....."
Posted by Tony at 7:21 AM