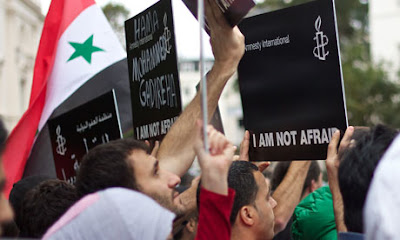 "Dozens of anti-government demonstrators gathered outside the Syrian embassy in London on Tuesday to show that they would not be silenced despite reports that President Bashar al-Assad's regime is trying to stifle international condemnation by torturing the relatives of those protesting abroad.

Many clutched placards on which they had written their names and home towns in Arabic and English as they chanted: "Down, down Assad!" and "One solution: revolution!"

The "I am not afraid" protest, which was co-ordinated by Amnesty International, attracted around 40 Syrians from around the UK.

In contrast to previous demonstrations, when protesters have reported being photographed by embassy employees, there was no sign of diplomatic staff or attempted interference with the hour-long event....."
Posted by Tony at 5:12 PM