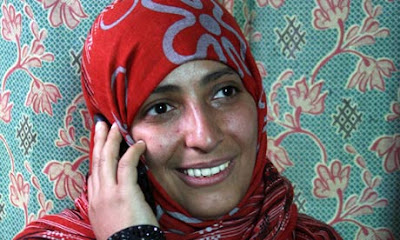 The human rights activist, joint winner of the Nobel peace prize, has emerged as a figurehead of the opposition in Yemen

"Known to some of Yemen's opposition movement as the "mother of the revolution", Tawakkul Karman has emerged as a crucial figure among the youth activists who began camping out at Change Square in central Sana'a in early February, demanding the end of President Ali Abdullah Saleh's three-decade rule.

In Yemen, a 32-year-old mother of three may seem an unlikely leader of the fight to overthrow the president, but Karman – a journalist and human rights activist – has long been a thorn in Saleh's side and has been jailed many times.

She was catapulted into the international spotlight this January after being seized from her car and slung into prison. Thousands of people poured on to the streets of Sana'a calling for her release. It was a key moment in Yemen's uprising when the tide began to turn against Saleh....

Many see Karman's award as recognition of the growing involvement of Yemen's women in the uprising. In a country where most women are neither seen nor heard, thousands have taken to the streets in recent months, defying authority and the weight of tradition to call for the fall of the regime, and the sight of 10,000 of them marching down a six-lane motorway in mid-April after Saleh accused them of "mingling with men" was too much for some to bear."
Posted by Tony at 6:48 PM