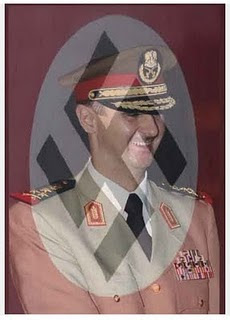 "....They said the death of Shalhoub was one of an increasing number of cases in which citizen spies are playing a direct role in assisting the Assad regime's security forces to crack down on pro-democracy protesters.

During nearly half a century of one-party rule, Syria's Ba'ath regime has maintained its iron grip on a nation of 22 million people through a network of civilian informers known as the awainiyya – the watchers.

From the man at the next table listening in on café conversations to the local shopkeeper, taxi driver or estate agent, Syrian society is rife with those who will inform on their fellow citizens. They do it primarily for money, said activists and analysts, but also out of fear, or sometimes because they are true believers in the ideology of the regime that Assad inherited from his father.

With the Ba'ath Party estimated at two million members, and with at least 16 branches of the security services, the numbers of awainiyya at work in Syria could be in the tens of thousands....

As the attempted revolution in Syria transforms power relations in one of the world's last police states, protesters are using social media to fight back. Facebook now hosts dozens of sites run by Syrian activists on which the names, addresses and photos of suspected informers are posted.

Residents can use the sites to report a suspected awainiyya in their neighbourhood and site administrators say they then monitor the suspect's behaviour before outing them. One entry accused a resident of the city of Latakia of "co-operating with security and informing on the men of the revolution".

"He currently resides in al-Martqla, the street connecting the Omar ibn al-Khattab. mosque and Sheikh Dahir, in front of Maher's sandwich shop. He hides at home or in his car and records the names of young people."

The site gives precise details of the suspect's address...."
Posted by Tony at 6:42 PM