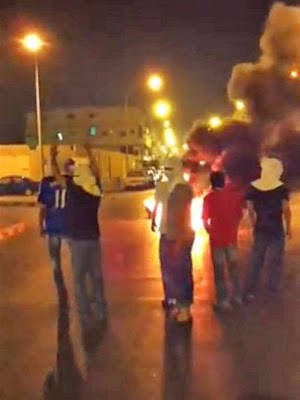 "Pro-democracy protests which swept the Arab world earlier in the year have erupted in eastern Saudi Arabia over the past three days, with police opening fire with live rounds and many people injured, opposition activists say.

Saudi Arabia last night confirmed there had been fighting in the region and that 11 security personnel and three civilians had been injured in al-Qatif, a large Shia city on the coast of Saudi Arabia's oil-rich Eastern Province. The opposition say that 24 men and three women were wounded on Monday night and taken to al-Qatif hospital.

The Independent has been given exclusive details of how the protests developed by local activists. They say unrest began on Sunday in al-Awamiyah, a Shia town of about 25,000 people, when Saudi security forces arrested a 60-year-old man to force his son – an activist – to give himself up.....

The Saudi statement alleges that the recent protests were stirred up by an unnamed foreign power, by which it invariably means Iran. The interior ministry was quoted on Saudi television as saying that "a foreign country is trying to undermine national security by inciting strife in al-Qatif". Saudi Arabia and the Sunni monarchies of the western Gulf have traditionally blamed Iran for any unrest by local Shia, but have never produced any evidence other than to point at sympathetic treatment of the demonstrations on Iranian television.

The 20 doctors in Bahrain sentenced to up to 15 years in prison last week say their interrogators tortured them repeatedly to force them to make false confessions that Iran was behind the protests. The counter-revolution in Bahrain was heralded by the arrival of a 1,500-strong Saudi-led military force, which is still there.

Mr Rayah, who flew from Saudi Arabia to Beirut to be free to talk about the protests, said: "People want a change and a new way of living." He said that, in particular, they were demanding a constitution and a free assembly for the Eastern Province. He also wanted the Society for Development and Change legally registered.

Mr Hassan blamed the protests on the fact "that there has been no political breakthrough"....."
Posted by Tony at 6:13 PM