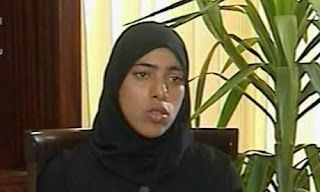 Zainab al-Hosni went missing in July and her body was returned to her family and buried. Now Damascus says she is alive

"Syria's government has sought to score a propaganda coup with the mysterious TV appearance of a young woman who had been reported to have been beheaded and mutilated by state security agents.

The macabre story was revived on Tuesday when the main state TV channel screened a brief interview with a woman claiming to be Zainab al-Hosni.

International human rights groups and Syrian opposition activists said Hosni had been killed after being detained in July.

The station described the interview as intended to discredit foreign "media fabrications".

Hosni's family confirmed that it was her in the film, but they could not say whether she was alive or had in fact been killed after the interview. The episode thus ended up posing troubling new questions...."
Posted by Tony at 6:28 PM