Computing Intifada: When Will Palestinians Revolt? 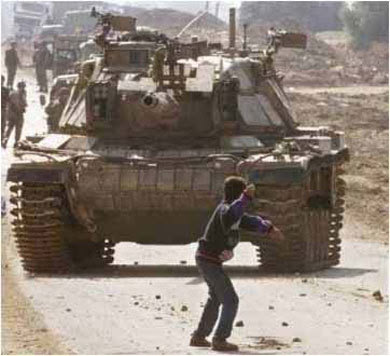 "When will the Palestinians revolt?

The answer, according to an Israeli official: not this year (as quoted by Agency France Press).

An internal Israeli Foreign Ministry report last month also concluded that a third Palestinian intifada or uprising was ‘unlikely’ this year. According to the unnamed official, “This report, which is more than 100 pages long, judges that an explosion of generalized violence in the form of a third intifada is unlikely.”.....

Former Israeli president Moshe Katsav said of his enemies: “There is a huge gap between us (Jews) and our enemies? Not just in ability but in morality, culture, sanctity of life, and conscience. They are our neighbors here, but it seems as if at a distance of a few hundred meters away, there are people who do not belong to our continent, to our world, but actually belong to a different galaxy” (The Jerusalem Post, May 10, 2001).

This might be a transition from Golda Meir’s wholesale denial of the existence of the Palestinian, or of other Zionist leaders depicting Palestinians as animals, beasts and cockroaches. It is also a more advanced and conscious form of dehumanization. Palestinians here are essentially ‘people’, yet devoid of every shred of humanity; they are temporarily elevated, to be fully destroyed. Worse, they are like aliens from another galaxy; ‘our enemies.’

Within the confines of this logic, everything that is obstinately frowned upon by the law, ethics or morality, becomes effectively good, expected and embraced: from the ethnic cleansing in 1947- 48 to the war on Gaza (2008-09), the continued state siege, the so-called Separation Wall, the daily violent practices of the Israeli occupation army, the unlawful, arbitrary imprisonments, the torture, the humiliation, the discrimination......

The Israeli report on the ‘unlikely’ revolt of the Palestinians in 2012 took 100 pages to articulate. I was present in 1987 at the first mass protest in Gaza which sparked the First Palestinian Intifada, the people’s revolution that took Israel and the whole world by surprise. And I can testify it took very few words to pronounce and articulate this revolution: “With our blood, with our souls, we will sacrifice for you, Palestine.”

No official analysis could ever predict such a moment."
Posted by Tony at 6:49 AM