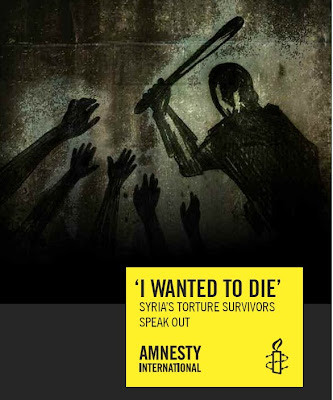 "People caught up in the massive wave of arrests in the wake of the Syrian uprising have been thrust into a nightmarish world of systemic torture, a new report by Amnesty International says today.

The scale of torture and other ill-treatment in Syria has risen to a level not witnessed for years and is reminiscent of the dark era of the 1970s and 1980s.

Released a day before the one-year anniversary of the start of mass protests in Syria, ‘I wanted to die’: Syria’s torture survivors speak out documents 31 methods of torture or other ill-treatment by security forces, army and pro-government armed shabiha gangs, described by witnesses or victims to Amnesty International researchers in Jordan in February 2012.

"The experience for the many people caught up in the massive wave of arrests over the last year is now very similar to that of detainees under former President Hafez al-Assad - a nightmarish world of systemic torture," said Ann Harrison, Interim Deputy Director for Amnesty International’s Middle East and North Africa Programme.

"The testimonies we have heard give disturbing insights into a system of detention and interrogation which, a year after protests began, appears intended primarily to degrade, humiliate and terrify its victims into silence."

Amnesty International said that torture and other ill-treatment of detainees generally followed a set pattern.

Many victims said beating began on arrest, then they were beaten severely - including with sticks, rifle butts, whips and fists, braided cables - on arrival at detention centres, a practice sometimes called the ‘haflet al-istiqbal’ or ‘reception’.....

Amnesty International said that the testimonies of torture survivors presented yet more evidence of crimes against humanity in Syria.

The organization has repeatedly called for the situation in Syria to be referred to the Prosecutor of the International Criminal Court (ICC) but political factors have so far prevented this happening, with Russia and China twice blocking weakened UN Security Council draft resolutions that made no reference to the ICC....

"We continue to believe that the ICC represents the best option of securing real accountability for those responsible for the grave crimes that have been committed against people in Syria," said Ann Harrison.

"But while politics makes that prospect difficult in the short term, Syrians responsible for torture – including those in command - should be left in no doubt that they will face justice for crimes committed under their watch. It is therefore essential that the Commission of Inquiry is strengthened and allowed to continue its work.""