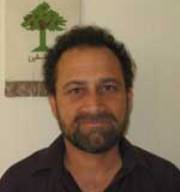 "In the winter months of 1987 a popular uprising erupted in Palestine. In what is known as the First Intifada, the Palestinian people rebelled against twenty years of occupation of the West Bank and Gaza Strip and forty years of apartheid, racial discrimination and humiliation in Israel. For six years mass demonstrations, strikes and university protests swept the country. Within these six years the iconic images of stone throwing boys facing military tanks went around the world. Haidar Eid is an active member of the Palestinian campaign for academic and cultural boycott of Israel and a professor of English Literature and Cultural Studies at al-Aqsa University in Gaza; he explains the significance of the First Intifada:


“Until the First Intifada the Palestinian question was completely marginalized in the international community. The uprising shattered the myth that Israel has the most moral army in the world. Here we had the world’s fourth strongest military literally breaking the bones of Palestinian children.”

In the last years of the Intifada secret negotiations began between the leadership of the Palestinian Liberation Organization (the PLO) and the Israeli Prime Minister Yitzhak Rabin. This process ended with a famous handshake on the lawn of the White House and the signing of what are known as the Oslo Accords. For Haidar Eid the signing of the Oslo Accords in 1993 was a political hijacking of the popular uprising:

“Unfortunately the right wing leadership of the PLO hijacked the outcome of the First Intifada. They thought they had no other option than to negotiate. They had an ideology of defeat, working around the idea that we should accept the West Bank and Gaza Strip as a future Palestinian state, even though these areas only compromise 22% of historical Palestine.”

The consequences of the Oslo Accords were, according to Eid, devastating for the Palestinian resistance for at least a decade. Two interlinked processes, which Eid terms as NGO-ization and Oslo-ization drained the Palestinian liberation movement and created the idea that, the two-state solution is the only feasible way to move forward. The greatest misunderstanding of the Oslo Accords was the framing of Israel and Palestine as two equal states fighting a territorial battle. It was no longer a question of how Palestine could be liberated from a settler-colonial oppressor but rather of the conditions under which Israel would accept an independent Palestine. Eid explains this dramatic shift:

“The Oslo Accords were part of a process of convincing the slave of his own enslavement. Oslo was a process of coming to accept the white master and ultimately defending his right to enslave the native!”....."
Posted by Tony at 7:43 AM