Assassination of key opposition figures in revolution's success story adds to region's ongoing crisis of legitimacy, yet some are still optimistic 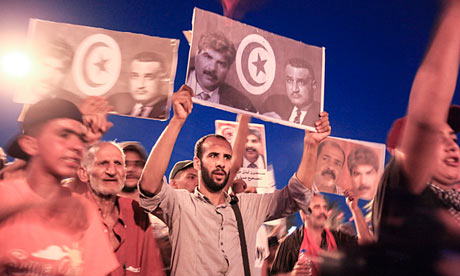 ".....What was supposed to be the success story of the Arab spring, sparked in December 2010 in the central Tunisian town of Sidi Bouzid, Tunisia's growing crisis has become inextricably entangled in the Arab spring's wider unravelling as dreadful events across north Africa and through the wider Arab world have fuelled each other.
Only six months ago – before the murder of Chokri Belaid, an opposition colleague of Brahmi killed in a strikingly similar attack, it had seemed as if Tunisia was on the last leg of its transition to democracy from the authoritarian regime of Zine el-Abidine Ben Ali.....

Inspired by the Egyptian army's coup against the Muslim Brotherhood president, Mohamed Morsi, Tunisian protesters are calling for the dissolution of their Islamist-dominated assembly.....

The Tunisian crisis comes not only against the background of the coup in Egypt but in the context of a worsening security situation in neighbouring Libya, which too has seen a recent assassination of an opposition political figure in Benghazi and attacks on Muslim Brotherhood offices in the country.....

In Bahrain, where protests were put down with Saudi Arabia's assistance, what advances there had been in political and human rights have been driven back by almost daily raids and arrests. Syria's uprising has turned into a bitter and bloody civil war with strong sectarian overtones that is destabilising neighbouring Lebanon and Iraq.

But it is Egypt that remains the source of the greatest concern despite its army-backed government on Thursday urging Morsi's supporters to abandon their Cairo protest camps, promising them "a safe exit" if they gave up without a fight. That offer seems to be a carrot after a far more chilling warning on Wednesday, when the interim government said it was ready to take action to end two weeks of sit-in protests by thousands of Morsi supporters at two sites – raising the possibility of a further potentially bloody showdown."
Posted by Tony at 1:12 PM