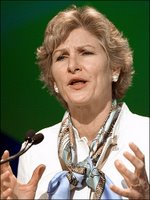 "PARIS (AFP) - US Under Secretary of State for Public Diplomacy Karen Hughes said she regretted Washington's efforts in the Palestinian territories went largely unrecognised in the media.

A close aide to President George W. Bush, Hughes was appointed to her ambassadorial post tasked with changing foreigners' perceptions of the United States, notably in the Arab and Muslim worlds.

"While I recognize that sometimes the coverage tends to portray the situation in a little different terms, I feel that the United States and President Bush don't always get much credit for the support that we provide to the Palestinian people," she told journalists during a visit to the Arab Institute in Paris.

But she said "we are working hard to work through the NGOs and others to deliver food and medical assistance and other assistance to the Palestinian people, because we are very concerned by the situation."