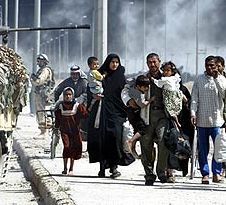 Critics charge that the Bush administration isn't doing enough to support Iraqis escaping violence in their nation, The New York Times will report on the cover of its Tuesday edition.

"With thousands of Iraqis desperately fleeing this country every day," write Sabrina Tavernise and Robert F. Worth for the Times, "advocates for refugees, and even some American officials, say there is an urgent need to change American policies limiting the number of Iraqis who settle in the United States."

The article notes that the White House had made resettlement plans for "just 500 Iraqis" in 2007, "a mere fraction of the estimated 60,000 to 90,000 Iraqis" fleeing Iraq each month. The State Department lays the blame on "a cumbersome and poorly funded U.N. referral system," Tavernise and Worth write.

"I don't know of anyone inside the administration who sees this as a priority area," one refugee advocate is quoted in the article. "We're not even meeting our basic obligation to the Iraqis who've been imperiled because they worked for the U.S. government," the writers quote a former American official. "We could not have functioned without their hard work, and it's shameful that we've nothing to offer them in their bleakest hour."

Some critics say the Bush administration has been reluctant to create a significant refugee program because to do so would be tantamount to conceding failure in Iraq. They say a major change in policy could happen only as part of a broader White House shift on Iraq.

For Iraqis, a tie to the United States is a life-threatening liability, particularly in harder-line Sunni neighborhoods. In 2003, Laith, an army interpreter who would allow only his first name to be used, got a note threatening his family if he did not quit his job. His neighborhood, Adhamiyah, was full of Baath Party loyalists. A month later, his father opened the door to a stranger, who shot him dead.

Many Iraqis who worked for Americans have already fled the capital or the country, and many plead for help or asylum on a daily basis. Of some 40 nationalities seeking asylum in European countries in the first half of 2006, Iraqis ranked first with more than 8,100 applications, according to the United Nations.