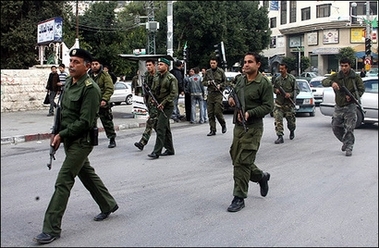 "Mahmoud Abbas, the Palestinian president, has declared a Hamas security force in the Gaza Strip 'illegal' after a surge in internal violence, officials said.

Shortly after Abbas' statement on Saturday, Hamas announced it would double the number of its 'executive force' in Gaza, formed in the months after taking power in early 2006.

Abbas's decision is likely to further fuel tension between Hamas and the president's once-dominant Fatah faction.

One Hamas spokesman has said that any action taken against Hamas' executive force, will be met with retaliatory force.

A spokesman for Abbas said: "The President of the Palestinian Authority, Mahmoud Abbas ... considers the executive force, both officers and individuals, illegal and outlawed."

I think that this could be the signal that the hot phase of the slow-moving coup against the elected Palestinian government is about to start. The Princess of Darkness Rice will be in the region soon and she wants the coup to be complete by that time and Generalissimo Dahlan fully disappearing Palestinians determined to resist Israeli occupation. All indications are that the preparations for the coup are in place, including putting Dahlan in charge of all PA puppet forces. Condoleezza and Olmert have demanded that the CIA asset Dahlan be in charge of these forces to lead the coup.

It was a good step for Hamas to be prepared by doubling the size of its force that would stand up to the Palestinian Pinochet. I think that, as regrettable as this is, a bloody confrontation is coming. Hamas has tried to avoid it, but it is of no use. The Usraeli orders to the Palestinian puppet will be obeyed and a coup will be attempted. The best hope is for Hamas and other patriotic Palestinians to have infiltrated the PA puppet forces and that many of them will disobey orders to shoot other Palestinians.

This is the most treacherous attempt to split the Palestinians and to crush the spirit of resistance to impose an Usraeli dictated Palestinian surrender. It is time for all Palestinians to be alert and informed. By information and vigilance the coup will be defeated.