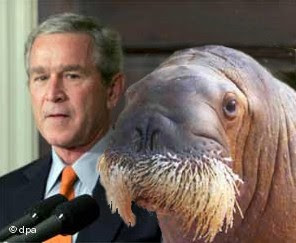 "WASHINGTON, Nov. 8 — The White House’s effort to challenge Iran’s nuclear ambitions has been hobbled by “four and a half years of failed diplomacy.” Its policy regarding North Korea is a dangerous fraud. It is pursuing an improbable Palestinian-Israeli peace at the expense of its stance against proliferation in the Middle East.

And that from a longtime Bush loyalist: John R. Bolton, the conservative lawyer who until less than a year ago was President Bush’s proudly unwavering ambassador to the United Nations......"
Posted by Tony at 5:30 AM