Carter urges 'supine' Europe to break with US over Gaza blockade 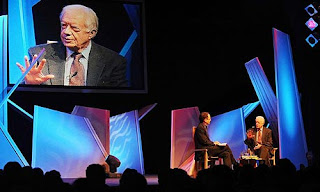 Ex-president says EU is colluding in a human rights crime

By Jonathan Steele and Jonathan Freedland
The Guardian, Monday May 26 2008

"Britain and other European governments should break from the US over the international embargo on Gaza, former US president Jimmy Carter told the Guardian yesterday. Carter, visiting the Welsh border town of Hay for the Guardian literary festival, described the EU's position on the Israeli-Palestinian dispute as "supine" and its failure to criticise the Israeli blockade of Gaza as "embarrassing".

Referring to the possibility of Europe breaking with the US in an interview with the Guardian, he said: "Why not? They're not our vassals. They occupy an equal position with the US."

The blockade on Hamas-ruled Gaza, imposed by the US, EU, UN and Russia - the so-called Quartet - after the organisation's election victory in 2006, was "one of the greatest human rights crimes on Earth," since it meant the "imprisonment of 1.6 million people, 1 million of whom are refugees". "Most families in Gaza are eating only one meal per day. To see Europeans going along with this is embarrassing," Carter said.....

While being scrupulously polite to the Palestinian Authority president, Mahmoud Abbas, and prime minister, Salam Fayyad, who represent the Fatah movement, he was scathing about their exclusion of Hamas. He described the Fatah-only government as a "subterfuge" aimed at getting round Hamas's election victory two years ago. "The top opinion pollster in Ramallah told me the other day that opinion on the West Bank is shifting to Hamas, because people believe Fatah has sold out to Israel and the US," he said.

Carter said the Quartet's policy of not talking to Hamas unless it recognised Israel and fulfilled two other conditions had been drafted by Elliot Abrams, an official in the national security council at the White House. He called Abrams "a very militant supporter of Israel"......"The Quartet's final document had been drafted in Washington in advance, and not a line was changed," he said......"
Posted by Tony at 8:28 PM