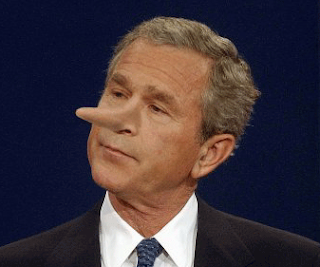 "Some may view ex-White House press secretary Scott McClellan’s new book as vindication for those who took grief – accused of “derangement,” “treason” and a bunch of less-printable things – for calling George W. Bush a liar over the past eight years.

But the more troubling point is that there has been little improvement in the Washington political/media structure that failed to call Bush out on his lies in a timely fashion.....

Indeed, McClellan calls the U.S. news media “complicit enablers” in the White House’s “carefully orchestrated campaign to shape and manipulate sources of public approval” for invading Iraq, according to a New York Times preview of McClellan’s book, What Happened: Inside the Bush White House and Washington’s Culture of Deception.

It’s significant, too, that McClellan’s title cites “Washington’s Culture of Deception” because the problem is truly broader than just Bush and his inner circle. The “culture of deception” both preceded and will surely outlast the current residents in the White House.......

However, even the Iraq disaster – in which major news organizations disgraced themselves, from the New York Times to the Washington Post to network and cable TV news – has done little to change matters......

Prominent Washington journalists eventually began repeating Bush’s lie as their own. In a July 2004 interview, ABC’s veteran newsman Ted Koppel used it to explain why he – Koppel – thought the invasion of Iraq was justified......

The new book also adds details about how Bush intentionally led the nation into war by shading the truth and manipulating events.

McClellan writes that Bush “managed the crisis in a way that almost guaranteed that the use of force would become the only feasible option.” The sales campaign was laid out by Bush advisers in summer 2002, McClellan said.

“Top Bush aides had outlined a strategy for carefully orchestrating the coming campaign to aggressively sell the war,” McClellan writes. “In the permanent campaign era, it was all about manipulating sources of public opinion to the President’s advantage.”

However, McClellan remains unwilling to use direct language in addressing Bush’s long pattern of dishonesty. The former press secretary lays some of the blame for Bush's falsehoods on his “lack of inquisitiveness” or a tendency toward “self-deception.”

It would seem to be long past the time for anyone to be making excuses for George W. Bush – or the elite U.S. press corps – not with the horrendous price paid by the Iraqi people, American soldiers and U.S. taxpayers."
Posted by Tony at 5:01 AM