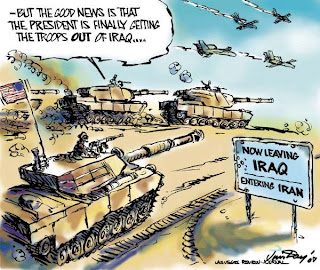 Get ready for war

"In spite of reassurances from the Washington talking heads and policy wonks that the U.S. is not about to launch an attack on Iran, or countenance an Israeli strike, the Sunday Times has the real scoop........
It seems, however, that the Israelis have already been using U.S. bases in Iraq to train for the coming attack. There have been denials all around – from the Iraqis, the Americans, and the Israelis – but both the Iraqi media and the Israeli media have reported, as the New York Post put it, that "Israeli warplanes have been flying over Iraq and landing at U.S. bases there in preparation for an attack on Iran." The Iraqi Web site Nahrainet reported Israeli fighter jets have been in rehearsals, so to speak, for their much-anticipated strike at Iran, flying at night over Jordanian airspace and arriving at U.S. air bases in Nasiriyah in southern Iraq and near Haditha in western Anbar province........
Translation: The U.S. will not be the first to attack Iran, but it may well join in once the Israelis get things started. Laura Rozen, writing in Mother Jones, reports that a parade of Israeli officials – including Israeli Defense Minister Ehud Barak and IDF Chief of Staff Gabi Ashkenazi – is due in Washington over the next two weeks to impress upon the Americans the urgent necessity of taking military action. Rozen spoke to neocon superhawk David Wurmser, former adviser to Vice President Dick Cheney on Middle Eastern affairs, who said.......
...... Not only that, but war with Tehran will upend the American political landscape and give John McCain more than a fighting chance to beat frontrunner Barack Obama.....
The Telegraph reports that Israeli Prime Minister Ehud Olmert recently told one of his closest friends that "in three months' time it will be a different Middle East." Yes, and also, perhaps, a very different America…"
Posted by Tony at 4:52 AM