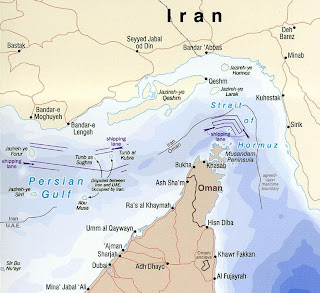 "IF YOU want to understand the policy of a country, look at the map - as Napoleon recommended.

Anyone who wants to guess whether Israel and/or the United States are going to attack Iran should look at the map of the Strait of Hormuz between Iran and the Arabian Peninsula.

Through this narrow waterway, only 34 km wide, pass the ships that carry between a fifth and a third of the world's oil, including that from Iran, Iraq, Saudi Arabia, Kuwait, Qatar and Bahrain.

MOST OF the commentators who talk about the inevitable American and Israeli attack on Iran do not take account of this map.

There is talk about a "sterile", a "surgical" air strike. The mighty air fleet of the United States will take off from the aircraft carriers already stationed in the Persian Gulf and the American air bases dispersed throughout the region and bomb all the nuclear sites of Iran - and on this happy occasion also bomb government institutions, army installations, industrial centers and anything else they might fancy. They will use bombs that can penetrate deep into the ground.

If Israel attacks alone, the blow will be more modest. The most the attackers can hope for is the destruction of the main nuclear sites and a safe return.

I have a modest request: before you start, please look at the map once more, at the Strait named (probably) after the god of Zarathustra.......

As I write these lines, a little red light turns on in my head. It is related to a memory: in my youth I was an avid reader of Vladimir Jabotinsky's weekly articles, which impressed me with their cold logic and clear style. In August 1939, Jabotinsky wrote an article in which he asserted categorically that no war would break out, in spite of all the rumors to the contrary. His reasoning: modern weapons are so terrible, that no country would dare to start a war.

A few days later Germany invaded Poland, starting the most terrible war in human history (until now), which ended with the Americans dropping atom bombs on Hiroshima and Nagasaki. Since then, for 63 years, nobody has used nuclear weapons in a war.

President Bush is about to end his career in disgrace. The same fate is waiting impatiently for Ehud Olmert. For politicians of this kind, it is easy to be tempted by a last adventure, a last chance for a decent place in history after all.

All the same, I stick to my prognosis: it will not happen."
Posted by Tony at 9:58 AM