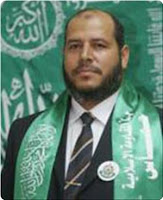 In an interview with the Palestine now website, Hayya explained, "in swap deals, the mediator plays a significant role in achieving the deal although the deal depends basically on the desire of the concerned parties to achieve it".

He also expressed hopes that the Egyptian mediator would form a "pressure force" [Dream on ....] on the occupation [to achieve the deal], and to be merely a mediator between the Palestinian resistance that hold IOF corporal Gilad Shalit and the Zionist enemy".

He asserted that steadfastness and resoluteness of the Palestinian people would force the Israeli occupation to release Palestinian prisoners serving high sentences.

The Israeli occupation government released Samir Al-Kuntar after 30 years in prison although it repeatedly insisted it wouldn’t release him.

"The Zionist enemy bragged in the past and insisted not to release Palestinian and Arab captives with blood in their hands; yet, they were forced by the resistance to release captives who carried out heroic armed operations and killed Israeli soldiers and settlers, and this would doubtlessly benefit captors of Shalit in insisting on their demands", Hayya underlined.

Moreover, Hayya underscored that Hamas Movement would follow the technique of Hizbullah party in not publishing any news about the swap deal in the media unless it is achieved.

"We decided in the coming stage not to talk about the swap deal in the media till it is, Allah willing, completed and achieved, and we wish the deal would be achieved very fast in the event the occupation met our demands and conditions", Hayya confirmed.

Finally, Hayya called on Palestinian mothers with sons serving long imprisonment terms not to lose hope, and to always have the hope that they will return one day to their beloved ones."
Posted by Tony at 4:15 AM