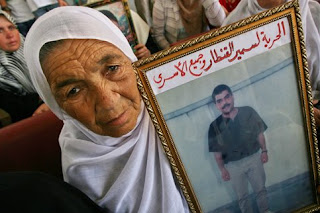 A Palestinian woman holds a picture of Samir Kuntar, the Lebanese prisoner jailed in Israel for nearly 30 years, during a weekly protest at the International Red Cross building in Gaza City calling for the release of Palestinian and Arab prisoners, 14 July 2008.

"......The most likely reason for Israel's decision to sign on to a prisoner-deal with such dire strategic implications is that it is eager to avoid another confrontation with Hizballah and to prevent future abductions of its troops. Israel's defeat in the war of July-August 2006, and its admission that Hizballah has grown even stronger than it was in the past, reflects a diminishing deterrence capability and its reduction of military status (one that casts doubt on its capacity to launch military offensives at this time, including against Iran). The biggest flaw of all is in the area of strategic planning: if Israel had agreed to a prisoner-exchange on or soon after 12 July 2006, it would have avoided further Hizballah provocations and spared itself the humiliation of losing a war, thus exposing its weakness to the world and forcing it to make one painful concession after another."
Posted by Tony at 5:05 AM