The Day Joe Biden Threatened to Kick My Ass 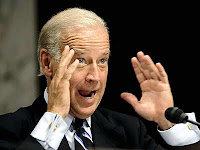 ".....I prefaced my question with the following two quotes, the first by Winston Churchill:

"The cause of unrest in Palestine, and the only cause, arises from the Zionist movement, and from our promises and pledges in regard to it" (House of Commons, 14 June 1921).

"You cannot have humane Zionism. It is a contradiction in terms" (Journal of Palestine Studies, vol. IV, 1975).

I then posed the following:

"Rather than succumb to the influence of various lobbying groups in Washington, such as AIPAC, and the untold amount of money they use to dictate policy, wouldn't it be more prudent to examine the real effects that collective punishment, daily humiliation, and countless civilian causalities inflicted by the Israelis have on an occupied population, and use that understanding to formulate a more rational approach toward the Palestinians?"......

Shortly thereafter Biden turned, put his arm around my shoulder, and addressed the audience.

"If this was not such a fine, articulate, and sincere young man, and he implied that my vote had been bought, I would give him a swift kick in the ass."