Why would Israel bomb a university? 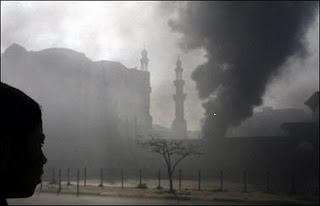 "As a Fulbright scholar and professor of American literature at the Islamic University of Gaza (IUG), I have always preferred to keep silent about the Israeli-Palestinian conflict. I always felt that it was my mission to preach love and peaceful coexistence. However, Israel's massive offensive against the Gaza Strip has spurred me to speak out.

Last night, during the second night of Israel's unprecedented attack on Gaza, I was awakened by the deafening sound of intensive bombardment. When I learned that Israel had bombed my university with American-made F-16s, I realized that its "target bank" had gone bankrupt. Of course Israeli politicians and generals would claim that IUG is a Hamas stronghold and that it preaches terrorism.

As an independent professor, not affiliated with any political party, I can say that IUG is an academic institution which embraces a wide spectrum of political affinities....."
Posted by Tony at 6:38 AM