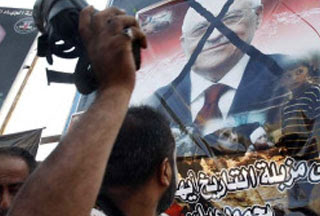 "08/10/2009 While furor against Mahmoud Abbas may come as no surprise in Hamas-controlled Gaza, there has also been outrage in his own West Bank territory. Abbas is accused of betrayal for bowing to US pressure over voting on a key report criticizing Israel’s offensive in Gaza. A vote that would have been one of many steps to bring Israel before a war crimes tribunal, something many people longs for.......

“The level of public protest is unprecedented,” said Ghassan Khatib, director of the Palestinian Authority’s media center. “I do not remember any situation before when the leadership was so unpopular,” he said, speaking by telephone from Ramallah in the West Bank. Khatib said there was a feeling among Palestinian leaders that “they have to reconsider” their approach.

In Gaza, posters appeared on walls on Wednesday calling Abbas a traitor and saying he should be consigned to “the trash heap of history.” A protester said Abbas had abandoned the cause and deserved shoes being thrown in anger at street posters showing his face. Many of them had taken off their shoes and slapped the posters of the Palestinian president.

Hundreds of Palestinians demonstrated in Ramallah on Tuesday against the leadership’s conduct and called on Abbas and other officials to resign.

PRESS OUTCRY AGAINST ABBAS
In the Palestinian press, Abbas's intervention to persuade the UN to put off its response has been greeted with fury, even in papers normally loyal to the president's Fatah faction......."
Posted by Tony at 3:14 AM