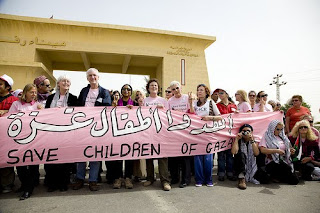 by Scott Horton, October 08, 2009
" When I heard that there would be antiwar protests across the country on October 7, 2009, mourning the 8th anniversary of the start of the invasion of Afghanistan, I immediately picked up the phone to get one of the great anti-warrior women of Code Pink to join me on Antiwar Radio for the occasion.
Imagine my shock at seeing this story in the Christian Science Monitor describing the new, post-trip-to-Afghanistan-position of Code Pink’s co-founder and most famous leader, Medea Benjamin.......
Interview recorded October 7, 2009. Listen to the interview........
Benjamin: Well I think it’s just full of distortions, because what we say is we want a responsible pulling out of U.S. troops and we certainly are against what McChrystal is calling for. We’re against sending in more troops, we’re against troops being visibly present in the villages because we think their presence is more of a threat to people there and puts them at risk. And we want our troops to pull out. We just want to do it in a way that is not going to lead to a Taliban takeover that will put women back inside the home......."
Posted by Tony at 3:55 AM