Fighting The Enemy Within: Fighters Detained In Nablus Go On Hunger Strike 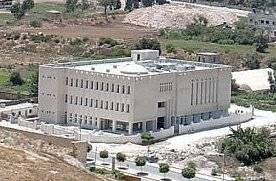 (Left: The PA's Jneid prison in Nablus)
"A number of Palestinian resistance fighter, detained by the Palestinian Authority at the Jneid prison in the northern West Bank city of Nablus, went on hunger strike four days ago and said that they will not break their strike until they are released.

One of the fighters said in a phone interview with the Maan News Agency that 12 fighters, including one of Abu Ali Mustafa Brigades, the armed wing of the Popular Front for the Liberation of Palestine (PFLP), are currently on hunger strike.

The eleven fighters are members of the Al Aqsa Brigades, the armed wing of Fateh....."
Posted by Tony at 6:22 AM